Christmas comes a little early as WordPress 4.4 was released last week on Tuesday. Called the “Clifford” release for the legendary jazz musician Clifford Brown, the new version is already available for download from your WordPress dashboard. Read more about the key features of the latest version…

We’re probably most excited about WordPress 4.4’s new intuitively responsive images. As we’re all well aware by now, your readers are viewing your site on a variety of screen sizes and devices. With the latest version of WordPress, your images will now look great on any device no matter what theme you’re using. Best part? You don’t need to do a thing (aside from downloading 4.4, of course).

You can now embed a post on any other WordPress site just by dropping in the URL of the original post into the editor. You’ll immediately be able to view a preview including the title, featured image and excerpt. Your site’s icon and sharing buttons can also be included in the embedded post. 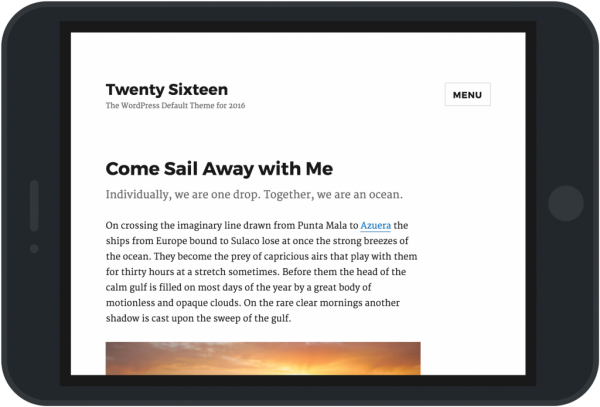 The latest take on this classic theme, Twenty Sixteen continues the responsiveness movement by offering one of the most fluid themes available. Twenty Sixteen was built to look great on any device and its clean lines and simple color-scheme keeps the focus where it belongs – on your content.

For those of you who care to look “under the hood”, here are the improvements offered in WordPress 4.4 as explained by WordPress.org:

Infrastructure for the REST API has been integrated into core, marking a new era in developing with WordPress. The REST API gives developers an easy way to build and extend RESTful APIs on top of WordPress.

Infrastructure is the first part of a multi-stage rollout for the REST API. Inclusion of core endpoints is targeted for an upcoming release. To get a sneak peek of the core endpoints, and for more information on extending the REST API, check out the official WordPress REST API plugin.

If you’d like to watch a quick video on the new features, WordPress has that covered, too: